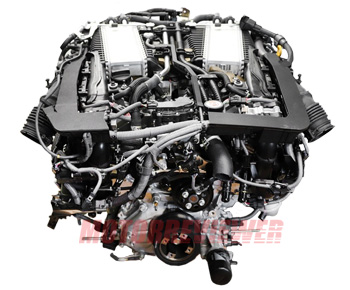 The Lexus GX460 replacement (Lexus GX550? Lexus GX340? Lexus GX416?) will most likely feature a relatively new engine from the Toyota power plant stable, the V35A-FTS 3.5-liter twin-turbocharged V6 gasoline engine. Toyota’s first twin-turbo engine in a V format, this engine debuted in 2017 in the Lexus LS500 cranking out 416 hp, 443 ft-lb torque with a displacement of 3,444cc (210 cu. in.). According to Toyota, the engine achieves new levels of power output compared to the displacement of the engine, along with higher levels of efficiency thanks to features like integrated aluminum crank shafts, a combined fuel injection system, two parallel turbo chargers, and water cooled exhaust manifolds.

Should this engine be featured in the next generation Lexus GX460 it would be a significant horsepower increase from 301 hp to 416 hp. The torque would also increase from 329 lb-ft to 443 lb-ft. All of these point to a more spirited GX drive but ultimately, one of the most endearing qualities of the GX power plant (which is based on the Prado) is that it is bulletproof – tried and true – proven over millions of miles across the harshest conditions in the world. The current engine is literally engineered to receive minimal maintenance (think oil changes under a baobab tree in Africa with nothing more than a wrench) while lasting 300,000+ miles. Can this twin-turbo version possibly provide the same level of durability, reliability and lifespan? Toyota must think so… they also plan to include it in the Land Cruiser 300.

Only time will tell if Toyota includes the twin-turbo V6 engine in the next generation Lexus GX or if the engine will prove as venerable as the current rock-solid engine, but either way, Toyota must continue to innovate in the face of stiff competition. And that is where consumers benefit the most!