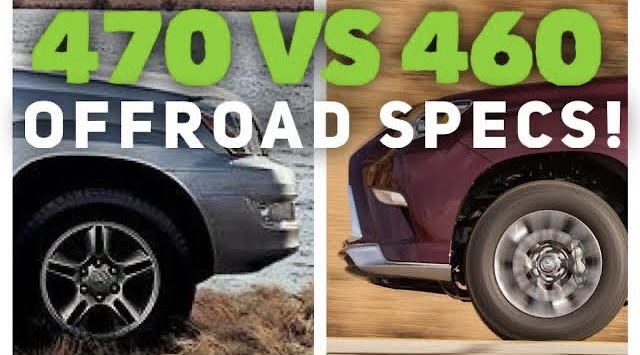 Which is better off road – the GX470 vs GX460?! The GX470 and GX460 are both great off road vehicles. They offer many features like all wheel drive/4 wheel drive, downhill ascent control (DAC), locking differentials, hill ascent control (HAC), crawl control and other options to make your off road adventure fun and enjoyable. But if you are in the market for one or the other, which is your best option? We compare both the GX470 and GX460 specifically for their off road capabilities so that you can make an informed decision. Of course, looks, budget, aftermarket support and other aspects are important as well so include those as well. Let us know what you think!

The Lexus GX470 and GX460 share many similarities: They both have full-time four wheel drive drivetrains, relatively similar length and width dimensions, the same number of doors (5) including the swing out rear gate and seating for 7. While neither offers front or rear locking differentials, they both offer center locking differentials. Despite these similarities, the do have some differences that might impact your decision. The GX470’s 4.7L V8 and GX460’s 4.6L V8 are similar in size, although the GX460 wins in the horsepower race at 301hp. The GX460 also wins with more torque at 329 lb. ft.

The GX470 and GX460 are both capable off road vehicles that can be used on mountain trails, dirt roads, or with minor modifications even rock crawling tracks. The updated styling of the GX460 2014 and onward greatly decreases approach angle to 21 degrees compared to the GX470’s approach angle of 30 degrees and the GX460 2010-2013 approach angle of 28 degrees. This explains why so GX460 2014+ models have off road bumpers installed. The GX470 bests even the GX460 2010-2013 approach angle, matches the departure angle, and has higher ground clearance at 8.3 inches. Also, the GX470 is shorter and narrower making it more nimble on off road trails. While the GX470 is lighter at 4,871 lbs, the engine also puts out less horsepower so the effect is muted. The GX470 still wins on off road approach, departure and length/width metrics though.

The GX470 and GX460 offer many similar options to make your off road driving experience more enjoyable. These include DAC (downhill assist control) to maintain a safe, consistent speed going down steep grades, HAC (hill ascent control) that is the opposite of DAC to control your speed going uphill, Crawl Control to maintain a slow controllable speed over large obstacles, KDSS Stability control and A Trac that acts like front and rear locking differentials only electronically controlled. The GX460 has a slight advantage because it can be ordered from the factory with crawl control. Overall, the GX460 wins in terms of off road options.

While the GX470 and GX460 have many similarities they do have some differences. When you consider all the above mentioned specifications the GX470 is the better off road vehicle. It’s higher approach, departure and breakover angles require fewer customizations to make it trail ready. It has almost all the off road options that the GX460 has. And the lower price on the used market means it has additional value. That said, both the GX470 and GX460 can be made to be incredibly capable off road and overland rigs!

Lexus GX470 vs GX460 – Which Is Better Offroad – Specs Comparison