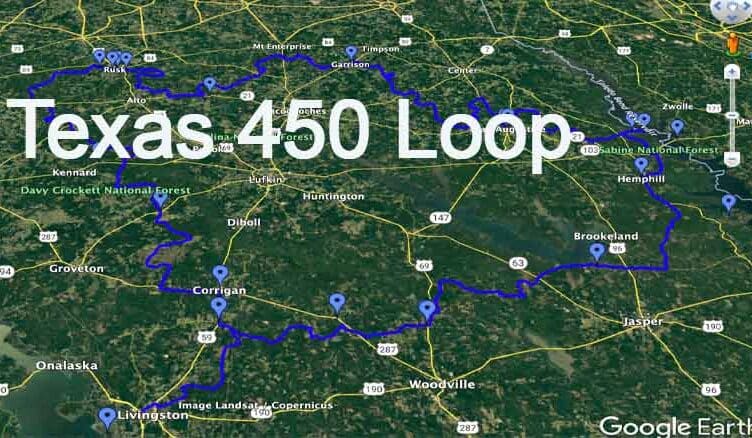 The Texas 450 Loop off road and overland trail is nestled in the Piney Woods portion of Texas. It’s a combination of paved road, gravel and dirt roads, and gravel and dirt forest service roads. The trail begins in Livingston, TX and heads north through the Davy Crocket National Forest to Rusk, TX. There it turns eastward passing through the northern edge of the Angeline National Forest, Mt. Enterprise north of Nacogdoches, San Augustine, and to the Sabine National Forest on the Texas/Louisiana border. Here, the trail turns south running the western edge of the Toledo Bend Reservior until hitting Tx Hwy. 255 near the Neadmore Tackle Store. The trail turns westerly running south of Lake Sam Rayburn until completing the loop at Livingston.

Given the trail is a combination of paved road, gravel road and dirt trails you should plan to experience varied terrain during your adventure. Rainfall can seriously degrade the road, especially on low lying or unpaved sections. The Texas 450 Loop is known for flooding so if it’s been raining, expect there to be mud and water on the road. There have also been reports of roads being washed out requiring unexpected detours.

The Texas 450 Loop trail typically takes 2 – 3 days to complete. Adventurers can choose to off grid camp in the Davy Crocket National Forest, Angelina National Forest of the Sabine National Forest. There are also several motels and hotels available along the path.

The Texas 450 Loop is known for its scenic, bucolic views meandering through pine wood forests, farm land and national forests. While many parts of the trail are developed by man, you will at times forget your surroundings leaving your cares and worries behind.

If traveling the Texas 450 Loop, be sure to understand recent rainfall amounts on the trail. If trails are likely to be muddy be sure you have appropriate recovery gear including traction boards. The loose sand and loam on these trails can quickly become thick, boggy mud waiting to cake and entrap even the most aggressive mud terrain tires.

Texas Off Road and Overland Trails