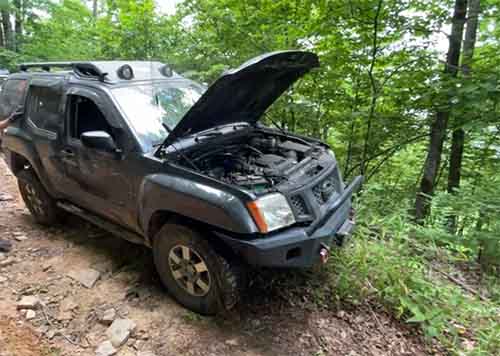 — DO NOT DRIVE THE K TRAIL WEST – IT IS PRIVATE PROPERTY —

The Kiamichi Trail (or “K Trail” as it’s more often called) is a notorious offroad trail in Oklahoma running east-west across the Kiamichi Mountains. Beginning in Clayton, OK, it treks over some 89 miles, intersecting the Three Sticks Monument north of Hochatown midway before rolling into western Arkansas. The legality of the western portion of the trail, from Clayton to the Three Sticks Monument, is highly debated and most agree it is now private property. Driving the western portion is tantamount to trespassing and rumors of expensive citations being handed out are common. The eastern portion of the trail travels county and forest service roads and is completely open to all who dare to drive it.

We had the luck and pleasure of driving the western K Trail many years ago before it was shut off to public drivers. Known as the technical side, the western portion is rocky with steep inclines and ledges in some spots. Washouts can appear anytime after heavy rain and have been known to make some spots impassible. It is also very overgrown in parts with a 100% chance of trail rash on your vehicle’s paint job. It took us two days to complete the western portion as the going is very slow. Our rigs, a 2012 Nissan Xterra Pro4x and a 2006 Jeep Wrangler Unlimited (“LJ”) were quite capable on the trail struggling little to traverse the rocky trail.

On a recent weekend in May 2022, we decided to attempt to complete the eastern portion of the K Trail. James made a repeat appearance in his Xterra while I decided to drive the trail in my 2016 Lexus GX460. Having spent an absolutely miserable (due to heat and humidity) night camping in the Ouachita National Forest the night before, we were looking forward to the promised cooler temps but were nervous to see forecasts for heavy rain, even severe thunderstorms, and thus expedited our attempt to early Saturday morning. From the Three Sticks Monument we replicated a photo from our first trip before heading east down the K Trail.

The eastern portion of the K Trail begins unimpressively. Relatively wide two-track meanders through heavily wooded forest with only modest changes in elevation. The first four miles of the trail are relatively easy – some ruts are deeper than others depending on recent rainfall – but most 4×4’s should navigate the trail successfully. The next 4 miles becomes much rockier with reduced speeds necessary to ensure careful tire placement on loose rocks that can damage undercarriage or temporarily high side an unsuspecting vehicle. Beyond mile 8 the trail narrows significantly with brush lapping at each side. You are guaranteed to get significant trail rash and paint scratches.

I truly wish I could tell you of the trail conditions beyond mile 9 but this is where the story takes a decidedly unexpected turn. James in his Xterra was in the lead driving down a decently steep decline narrowed on either side by encroaching overgrowth. A pair of Jeeps that had passed us a few miles back had reversed direction and were pushing hard up the trail. Given their speed, we yielded, backing up and onto a small clearing on the cliff side of the trail. Our cars were pointed downhill at about a 30 degree angle… a detail that will soon become important.

After the two Jeeps passed, James placed his rig in drive to continue down the trail. However, the transmission failed to engage, even after several attempts. We fiddled with the gear shifter several times, determining it was the shifter itself causing the problem (as opposed to an actual transmission problem). Fortunately, we had cell signal and a quick search on YouTube identified the fix – a cable attached to the gear shifter had come loose. 15 minutes of wrenching and making a makeshift cotter pin out of wire fixed the shifter and the Xterra once again would engage to drive. That’s when the steam starting pouring from the engine bay…

Remember how we were at a 30 degree down angle? Well, not thinking about it, we left the Xterra running while we fixed the shifter. The downward angle was just enough to impact the cooling system which overheated and overflowed. After letting the engine cool and very carefully replacing lost coolant with water, we attempted to run the rig again. Several attempts later we determined something was critically wrong – the engine would run for a few minutes and then quickly overheat again. Upon further inspection, we realized the heater hose inlet (a section of coolant system at the firewall) had either broken due to the stresses of the flex or had blown due to the overheating engine. Either way, it needed to be repaired before the vehicle could be driven off the trail. We attempted a field repair using flex seal and zip ties to no avail. It was time to tow the rig back to the trailhead.

Using a jerk strap attached to d rings on the front of the Xterra and the rear hitch of the Lexus GX, we slowly inched our way back across the rocky, at times steep, K Trail towards Three Sticks. We averaged 2 miles per hour for the first 4 miles due to the trail conditions. Things began returning to easier two track and we were able to increase our speed to 10 miles per hour. In all – it took us almost 3 hours to pull the Xterra back to the trailhead.

The Lexus GX460 is an extremely capable offroad vehicle and can effectively tow a 5,000lb Xterra up and down some pretty gnarly trails. I placed the transmission in low and kept the transmission in 2nd gear and she never once grunted for power. The GX460 V8 and low gearing transmission worked perfectly for this trail recovery!

I won’t bore you with the remaining details but in general the Xterra had to be towed back to Broken Bow, OK (even after a 2 hour side trip to an auto parts store to replace the broken part). It was late, we were hungry, and the weather we had been dreading earlier in the day had now rolled in and we were cloaked in a dense fog, high winds, and mist. I made the executive decision to book a motel for the evening where we could lick our wounds from the failed attempt at completing the K Trail East. James spent Sunday in Broken Bow awaiting the garage to open Monday morning. He was there at first light to beg for a quick repair and was back on the road before lunch. A full coolant system flush and a new $29 thermometer were all that kept us from normal operations.

It wasn’t the end we wanted or expected. We had high hopes of finally completing the full K Trail, end to end, but it was not to be. Seeing how dense the brush became at mile 9, I’m not sure I really want to complete the K Trail though. If I decide to go back it will be in a rented Razor…